4th Sept 2019 Paul Monkhouse - Down The Front Media "Equally epic and claustrophobic, this is a bold and sinister track that sees the snarling twin guitars of Chris Young and Darragh Shields snapping and slashing at each other over the intro whilst Gabriel Grecco and Alex Sanchez de Orduna bring the crushing rhythm of bass and drums. And then, the vocals come in. It can’t be overstated just how powerful and unique Hazel Jade Rogers voice is, compelling and casting such a spell that you just can’t get away, even if you wanted to"

1st April 2019 ROHO - RCN Magazine “The songs are full of energy and momentum, everything fits. The icing on the cake is frontwoman Hazel Jade. She has a really great rock and blues voice and reminds some of our songs of our Hard Rock "Mum" Doro. In the blues pieces like "Cheating Woman" she sounds more like Beth Hart. The two guitarists were coined by Gary Moore and Slash, among others. Great duel with "Armies Rising", where everyone has a loudspeaker box for themselves. The hymnic "Never Be Me" has catchy tunes and within a short time the head nods automatically. As it should, the five young Irish people complete the CD with two slow, languishing ballads. ROHO 8 out of 9 points”

11th Dec 2018 Lars Schmidt - Metalized “"There are twin harmonies on the guitars, cool breaks and masses - like in: shitloads - of good energy in Irish Elevation Falls. And singer and bandwriter Hazel Jade is a true revelation.”

1st Dec 2018 Darren Mc Nulty - The Art Of Rockin' “As I sat in Fibber Magees on yet another cold and wet November night I couldn’t help feel a sense of excitement come over me as the ever humble Elevation Falls began to set up their equipment. From listening to their latest album “What Will Be” released this year I waited with patience and excitement to see how well their songs could be performed live. I wasn’t let down, in fact, I was blown away with the show I had seen.”

15th Sept 2018 Michael Kiernan - Musibiz Ireland "If you are looking for the next great rock act to come out of Ireland then you need look no further than Elevations falls. To all the Major labels out there . Check out this band in Ireland as they're are ready to go" 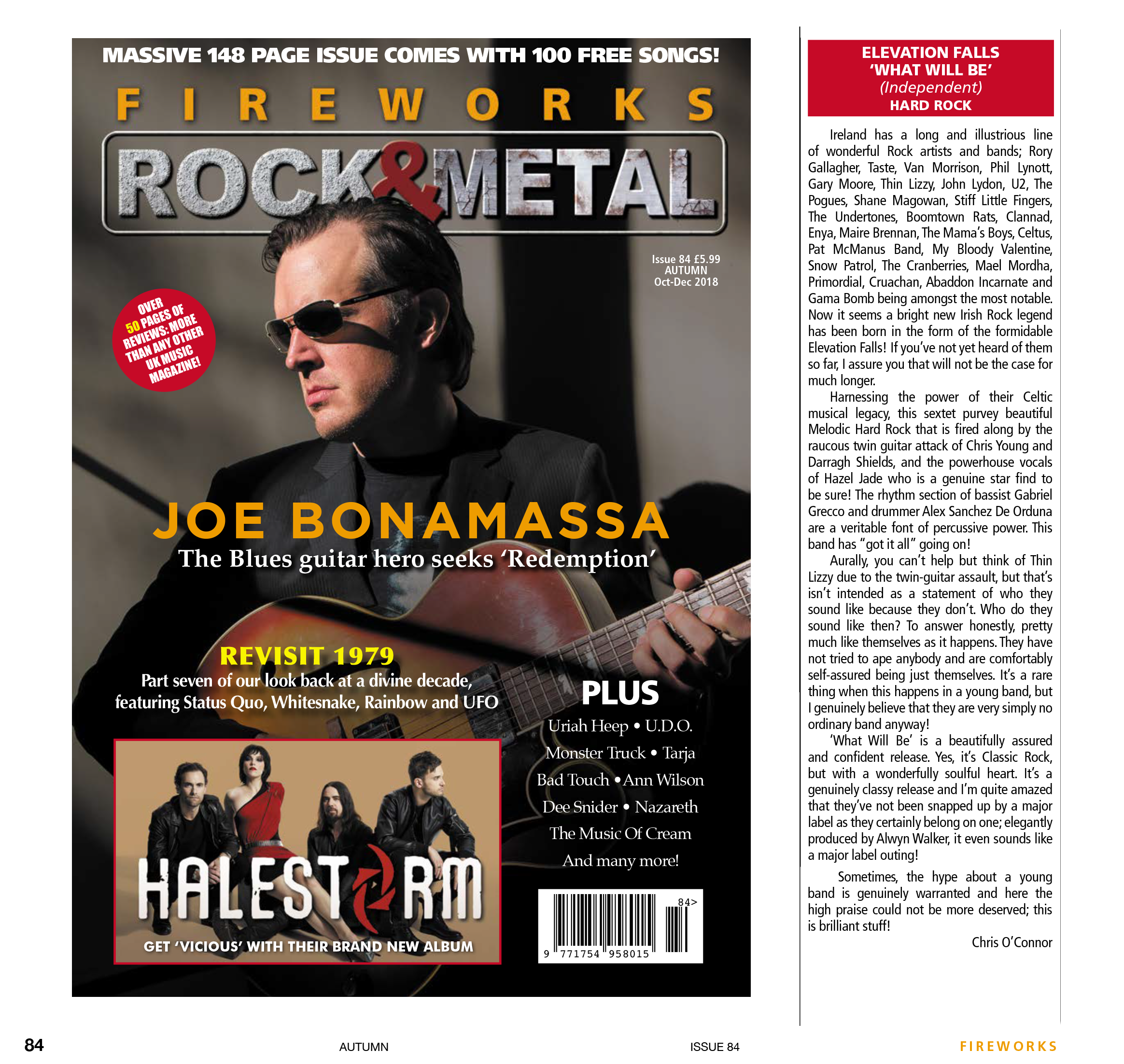 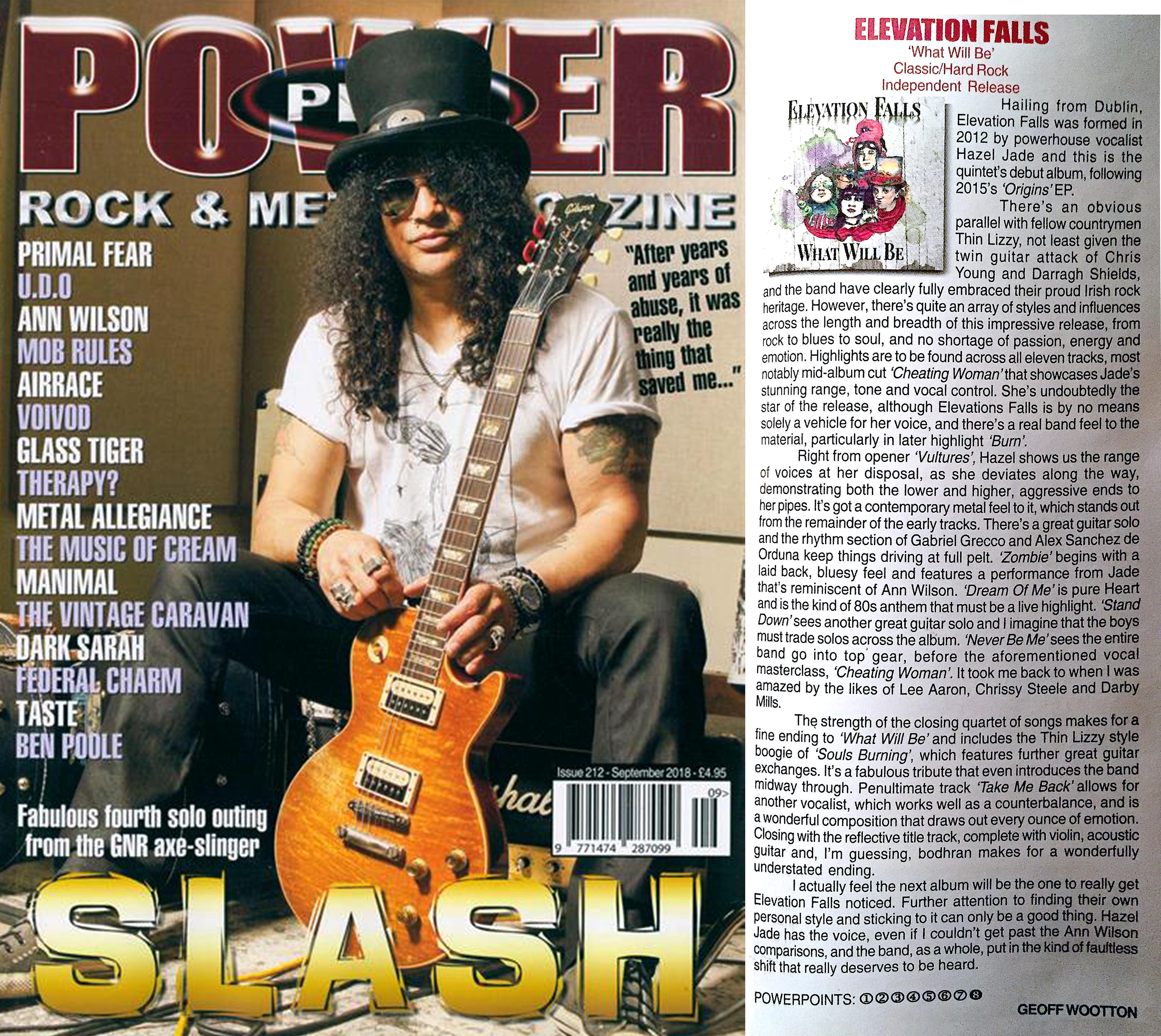 "SUNFLOWER FESTIVAL REVIEW: Barn Stage – and this was where Saturday happened, at least from my perspective. There were a couple of absolute stand out acts in this tiny space. Early on, Elevation Falls from Dublin lit the place up with their energy and infectious enthusiasm. Big guitar sounds and blasting vocals was a great way to forget about the rain." - Aug 2nd 2018 Michael Barbour- Gigging NI

"Elevation Falls will be massive… it’s just a matter of time." "The best vocals I’ve encountered in a while. This lady has a breathtaking range, both tonally and stylistically. She can turn on the rock/metal aggression as much as delivering lyrics through a delightfully smooth timbre… and everything in between…" Jun 30th 2018 Mark Holmes - Metal Discovery

"I admit that I was rewarded with eleven brilliants this time, where everyone works for me and proves that the Elevation Falls band is more than just a potential ….to take their special mixture and full harmonies to as many stalls as possible and to share and sow the seeds of a beautiful talent even farther from Ireland and England, because this, honestly, They deserve it. 9/10" 5th July 2018 Sandi Saba Soba - Rock Hard Slovenia

"Beautiful debut album of a band that deserves to find a record label." 2nd July 2018 Lords Of Metal

"Hazel Jade is as much Ann Wilson (Heart) as Cristina Scabbia ( Lacuna Coil ). Modern Rock, a touch of vintage authenticity and high-flying female vocals : Elevation Falls has featured some of the most popular elements in today's Hard Rock audience"1st July 2018 Music In Belgium

Artists In The Spotlight

"With the "What Will Be" album, the Irish have taken a serious step towards establishing their popularity and gaining new supporters. I think it would be very unfair if they were not appreciated by the fans as well as by the music industry. It is worth having eyes (and ears!) Wide open to this interesting promising band." June 20th 2018 Artur Chacklowski MLWZ

“ELEVATION FALLS AND THE BIRTH OF A NEW ROCK ERA IN IRELAND - I have being waiting over 20 years for a decent Rock act to come out of Ireland and I think I have found them In Elevation falls. Those were the days when we had the likes of Rory Gallagher, Thin Lizzy and the legend Gary Moore, blaring out on the radio on a daily basis but I haven’t heard anything that resembles those legends, for what seems a lifetime now. Go and see this band. There is so much going on at this show, both in new music and showmanship . It is one of the best nights you will ever have.” *April 21st 2018 *Michael Keirnan - MuziBiz

“Hazel's singing is raw power and extreme honesty. She does not seduce or play her audience, but by some jedi power she just sends our hearts and souls into space, unreal and so bloody REAL at the same time. There is no pose or pretense just wild pure energy, and that stands for all members of Elevation Falls, they are not on stage to sell you something or to sell themselves, they are there because they love to make music, their passion for it is palpable” May 21st 2017 Gia Fox - Fan Review

“Well I have heard the origins EP a good few times now, and I would highly recommend it to anyone who like the blues, rock and classic rock genres of music.” Jan 29 2017 Jon Harris - Project Metal Music

"The plaudits for vocalist Hazel Jade are undeniably appropriate and justified, in a rock sense, few would be able to match her power and range right now" Jan 15 2017Remy's Music Blog

“'That voice can really sing all notes, it is really amazing what a gifted voice. Their music has to be heard around the world, they deserve a tour around the globe' Full Review Here From the Netherlands!” Jan 5th 2017 Roy - Chatsong

"What stands out to me in this track is the variation in the vocals, it’s just insane, proper talent. Nice and subtle in one part of the song and then ROCK QUEEN in another." Dec 8th 2016 Eanna - The Juicy Mac

"This is a relaxing rendition of the well-renowned number that exhibits some superb singing skills by vocalist Hazel Jade..... Dec 23rd 2015 Dave Simpson - Pure M

“This track has everything you could ever want from a Christmas cover: deep, rich, soulful vocals paired with beautifully played piano and soft drumming, polished off with light strings. To make the track even more impressive, the vocalist is only 19, but has a sound way beyond her years.” Dec 02 2015 Clare Mulaniff - Nitelife

“This is an excellent start from a young band with writing skills beyond their years. Hazel Jade's vocals continue to entertain, provoke and just downright impress. The ranges and breadth of rock styles are embraced fully and you will be surprised as you listen to each track. This band will be going places so keep an eye out for them! Full marks! We're impressed. Hoping to see the band live in the USA soon too!” Nov 27th 2015 Busbie - KeltCulture Media

4th Sept 2019 Paul Monkhouse - Down The Front Media DEMON - "Equally epic and claustrophobic, this is a bold and sinister track that sees the snarling twin guitars of Chris Young and Darragh Shields snapping and slashing at each other over the intro whilst Gabriel Grecco and Alex Sanchez de Orduna bring the crushing rhythm of bass and drums. And then, the vocals come in. It can’t be overstated just how powerful and unique Hazel Jade Rogers voice is, compelling and casting such a spell that you just can’t get away, even if you wanted to" 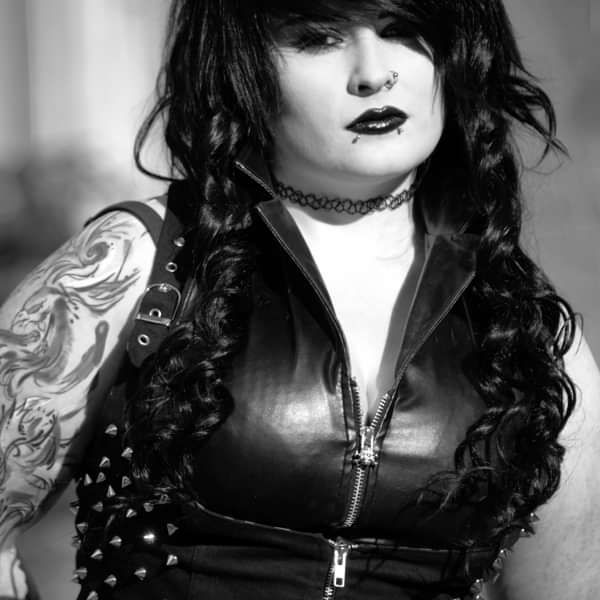 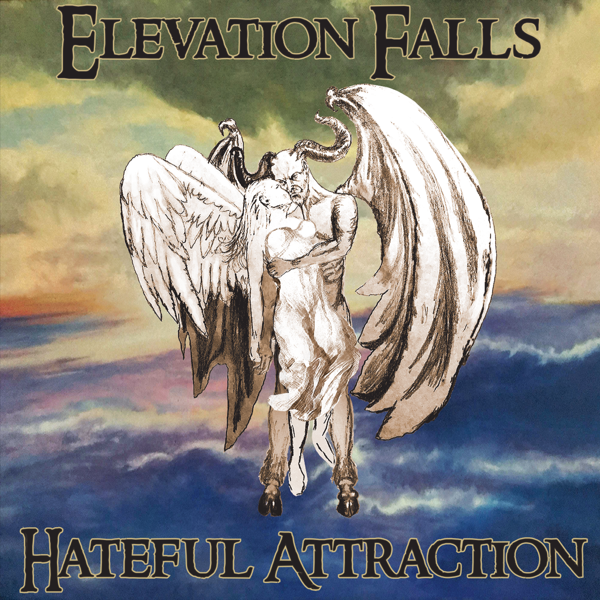